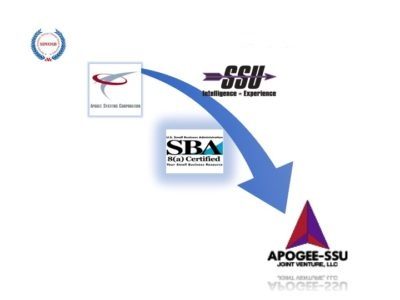 Apogee-SSU Joint Venture provides our customer a small business contracting option that has both the low risk characteristics of an established and experienced large business with competitive lower costs of a small business.   Apogee-SSU Joint Venture has its genesis in the SBA 8(a) Business Development Program with Strategic Solutions Unlimited, Inc. (SSU)’ s mentorship of Apogee Systems Corporation.  Apogee Systems Corporation is a woman, minority, service disabled veteran owned Delaware S Corp located in Springfield Virginia.  SSU, a North Carolina Corporation located in Fayetteville, was once a large business and has now returned to being a service disabled veteran owned small business.  The SBA approved this mentor protégé relationship on 21 November 2014.  Our joint venture, combined with the SBA 8(a) mentor protégé agreement, is particularly advantageous to the government in that this contractual relationship leverages SSU’s experience and past performance.  This long term commitment by SSU to support, teach and evolve Apogee Systems into a self-sufficient and thriving business in the federal sector goes beyond contractual obligations.  The foundation of Apogee Systems and SSU’s relationship lie upon a longer established trust relationship between LTC (Ret) Hae-Sue Park (Founder of Apogee Systems) and MAJ (Ret) Tony Martin (Founder of SSU) in the United States Army.  Ms. Park and Dr. Martin both served together on active duty as assistant professors at the United States Military Academy’s, department of Social Sciences.  As successful operational leaders, both corporate founders are committed and understand academic and operational excellence insuring optimal outcomes of our customers. 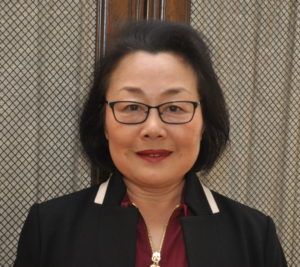 As Chief Executive and Founder, Hae-Sue Park assumes full responsibility for the development and management of Apogee Systems Corporation.  Her vision to provide quality and proven talent and services to the government customer is founded on the desire to continue service to the Nation.  Her leadership and drive shapes Apogee Systems strategic direction and growth.

A US Army veteran Ms. Park initially enlisted as a Multichannel Radio Operator in the Signal Corp.  Subsequently, in 1987 she received a commission in the Regular Army upon graduation from the United States Military Academy, West Point.  Her twenty one years of service to our Nation include information technology assignments that range from the tactical arena of command and control communication operations in Korea’s DMZ, to National strategic operations as commander of the Department of Defense’s only secure satellite communications constellation.    Throughout her career, Hae-Sue served in a spectrum of leadership positions that began as a communications platoon leader in the 56th Field Artillery Command (Pershing), culminating with selection to command the 53rd Signal Battalion (SATCON).  Other highlights of her military service include assignments as Assistant Professor of Economics at the United States Military Academy West Point, Signal Corp Assignment Officer (Majors, Lieutenant Colonels, Colonels) US Army Human Resource Command, and Special Assistant to the Chief of Staff Army Pentagon.

After retirement from active duty as a Lieutenant Colonel, she has been applying Army leadership values in private industry. LTC (ret) Hae-Sue Park served as a member of Defense Advisory Commission on Women in the Service (DACOWITS) and the Presidential Rank Review Board.

Ms Park holds a Bachelor of Science Degree from the United States Military Academy and a Masters of Business Administration from Harvard University. As President and Founder of Strategic Solutions Unlimited, Dr. Tony Martin works diligently to develop lasting relationships with intelligence and defense industry players both old and new. In addition to being a successful business leader, Dr. Martin is also a demonstrated expert in the areas of intelligence analysis, counter-terrorism, strategic planning, and organizational development. He remains focused on creating excellent outcomes in all endeavors.

Dr. Martin is a retired Green Beret with 22 years of active duty service. He spent the majority of his career in 7th Special Forces Group on Special Forces Operational Detachment Alpha (SFODA) and later served as a Military Intelligence Officer at Special Forces Command at Fort Bragg, NC. He was also assigned to the U.S. Military Academy at West Point where he served as an Assistant Professor in the Department of Social Sciences. He taught courses in International Relations, Comparative Politics, Latin American Politics, and Game Theory.

Prior to founding SSU in 2008, Dr. Martin, as Chief of Security and Intelligence Division, directed the Anti-Terrorism and Force Protections programs for Fort Bragg, the largest U.S. Army installation.

Dr. Martin is also passionate about giving back to the SF community–active duty soldiers, veterans, and their families. He founded the Special Forces Scholarship Fund and serves on the Board of the Special Forces Charitable Trust.

He holds a Ph.D. and a M.A. in Political Science from Duke University, as well as a B.A. in History from Campbell University. Since assuming the role of Chief Operations Officer in August 2008, Erik Ross has handled the day-to-day functioning of every aspect of operations for Strategic Solutions Unlimited. An experienced military and corporate leader, Mr. Ross tracks the progress of numerous projects from start to finish, placing a premium on turnkey problem solving and open avenues of communication with all parties. In addition to extensive project management skills, Mr. Ross has a profound knowledge of the modern military intelligence community. He is particularly attune to the unchartered challenges posed by an increasingly intertwined digital world.

Mr. Ross holds a M.S. in Management, a Master of Business Administration and a B.S. in Liberal Arts from Excelsior College.

Mr. Burns served over 21 years in the U.S. Army, serving the last 17 years specifically as a Military Intelligence Officer. His intelligence assignments range from Battalion to Corps, including postings at a Combined/Joint Task Force, a Geographic Combatant Command, and the Joint Special Operations Command. Mr. Burns’ comprehensive military experience has allowed him to hone skills in a wide range of intelligence arenas. In 2010, he culminated his military career as the G2 of the 82nd Airborne Division with one year as the J2 of Regional Command East in Afghanistan.